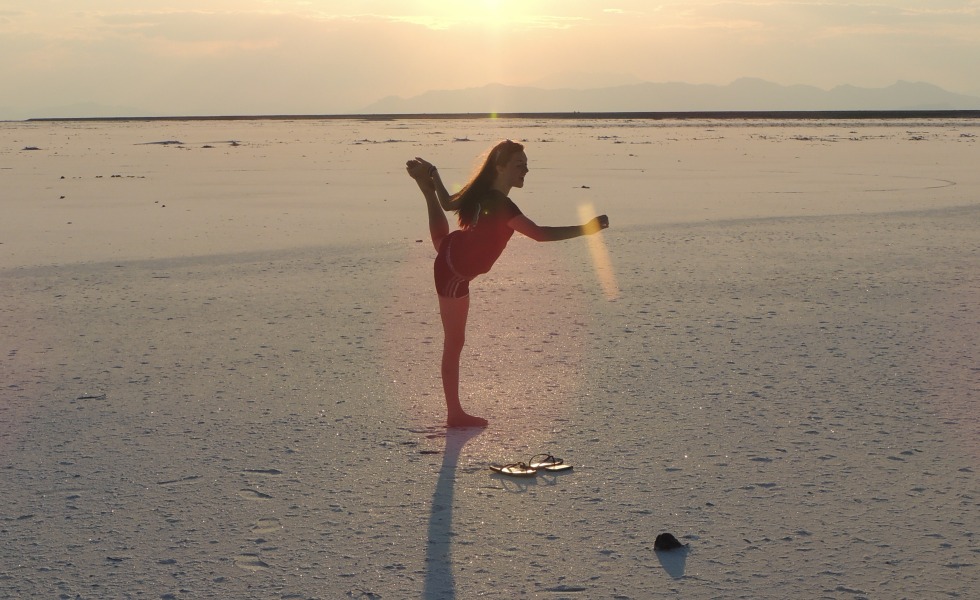 When most people think of the Bonneville Salt Flats they think of land speed records and vast expanses of salt that must be crossed to get to more interesting areas. At least that is what my daughter and I thought until our car overheated. Waiting for a car to cool is boring in any situation, but as we sat looking out at the flat, whiteness sitting in the car became unbearable.

As I was growing up my family crossed the flats many times. My father stopped once at the remnants of the Saltair Pavilion, a historic resort located on the shores of the Great Salt Lake, to let his children float in the briny water. We also pulled over onto the shoulder of the road once to scoop a souvenir bottle of salt. But that was all. The flats remained a place to cross without stopping.

Far from roads and business my daughter and I were stuck. We opened our doors to the warm, brine tinted wind and discussed the problems pioneers must have had crossing the area. “Do you want to go walk on it?” I asked. Fully expecting a disinterested, “not really,” I was surprised when she said, “sure.” So we stepped off the known texture of the pavement and strode forth onto the crunchy surface of the flat.

The first thing we noticed was the salt was not truly flat. Bubbles of gray clay from the ancient lakebed pushed the salt into ringed formations a few inches high. Layers of salt crystal formations made small spires only millimeters tall. In other places the salt formed smooth flows you would expect to see on a cave floor. Our footprints were edged with sharp crystalline edges and would remain long after we had traveled on.

We decided to walk to a high berm that cut across the salt desert about a half mile from our car. The sun began to set as we walked, painting the salt with a soft rose colored hue. We drew designs with our steps – swirls and circles, a double helix. We found remnants of glass bottles smoothed by the wind and salt. And throughout our walk the wind hummed across the expanse.

At the base of the berm the ground became soft. Our feet slipped below the crust into the gray muck of the lakebed. We scrambled up the bank to escape the clinging mud and were rewarded with a vista that stretched to the silhouettes of mountains in the far distance. The berm held the faint tracks of an old dirt road and we decided to walk along it for awhile. Were did the road go? Was it the remains of the railway that took visitors to the distant Saltair? Whatever its purpose in the past it provided a great trail across the salt without sinking into the mud.

Finally, the sun started to sink behind the distant mountains. We climbed down the berm and angled back toward the car. Noticing some dark blobs in the sand we detoured to discover that previous visitors had created artwork with found items. Rocks, sticks, and bottles were the medium of choice for unknown artists. As we walked parallel to the road we discovered alien animals, mandalas, names, and hearts filled with initials. Each the mark of other people who had taken a moment to stop, get out of their car, and explore.